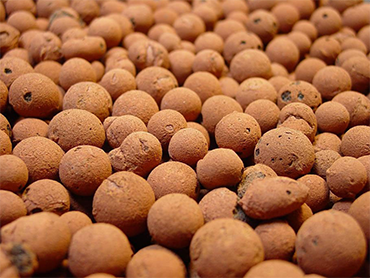 This is a popular growing media because it is so versatile. Expanded clay pellets, or hydroton are about the size of marbles. They are very lightweight making transplanting and harvesting very easy. They are absolutely fantastic for a variety of hydroponic techniques such as DWC, Ebb and Flow, and NFT and are a favorite of small producers using media bed or Dutch bucket techniques. These clay pellets are made by heating clay to over 2,000 degrees Fahrenheit using a rotary kiln, which gives it that signature pebbly form. Hydroton has a lot of pore space which allows the nutrient solution to flow through, ensuring roots have access to plenty of oxygen for healthy root growth. It also provides good colonization for microbial populations. Hydroton grow media is reusable, it can be cleaned, sterilized, then reused again. 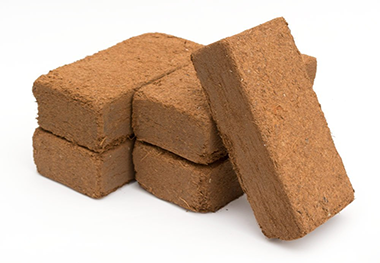 Coco coir is a fantastic all-around growing media. Coco coir (Coconut fiber) is from the outer husk of coconuts. What was once considered a waste product, is one of the best growing mediums available. Coco coir is quickly becoming a favorite among hydroponic gardeners. It has outstanding water and air holding capacity. It can hold eight  to nine times its own weight in water and still hold on to around 22% air. Coco coir is an organic plant material, it breaks down and decomposes very slowly, so it won't provide any nutrients to the plants growing in it, making it perfect for hydroponics. Because of its air and water holding capacity and pH, it is a very forgiving substrate and great for beginners. Its anti-fungal properties helps rid plants of soil borne diseases (inhibits pathogens like phythium and phytophthora). The biggest downside with coco coir is build up of salts so it's a good idea to flush from time to time. Good quality, hydroponic grade coco coir will have not have a high salt content, but you should always flush it with water before use until no more tannins are seen (tannins stain or color the water brown). 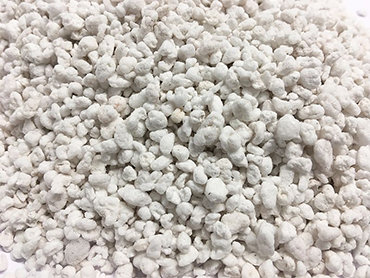 Perlite is one of the best hydroponic growing mediums around. Perlite is something that many traditional soil gardeners already recognize. It’s a soil-free growing medium that has helped to add aeration to soil mixes for years. Perlite is a mined material, a form of volcanic glass that when rapidly heated to more than 1600 deg F to create an extremely light and porous material. It has one of the best oxygen retention levels of all growing media because of how porous it is. Because of the super heated manufacturing process, Perlite is also sterile when you purchase it. It is also pH neutral. Its weight can be a downside in certain hydroponic systems where water interacts directly with the growing media, causing it to shift around and wash away. Because of this, perlite is rarely ever used alone – typically it is mixed with coco coir, soil, or vermiculite. 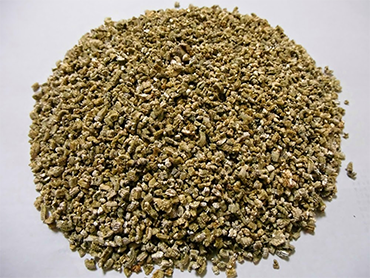 Vermiculite very similar to Perlite. It’s a mineral that is heated until it expands into pebbles. It has a high cation exchange capacity and retains more water than perlite and can wick (draw) water and nutrients upwards. The major drawback of vermiculite is that it retains too much water to be used by itself. Vermiculite is most frequently used in conjunction with perlite as the two complement each other well. Vermiculite retains moisture (about 200% - 300% by weight), and perlite doesn't so you can balance your growing medium so that it retains water and nutrients well but still supplies the roots with plenty of oxygen. A 50/50 mix of vermiculite and perlite is a very popular medium for drip type hydroponic systems as well as ebb and flow systems. Vermiculite is commonly used in combination with other types of media to create a highly customized media for specific hydroponic applications. Because of its high water holding capacity, vermiculite is great for Wick systems. 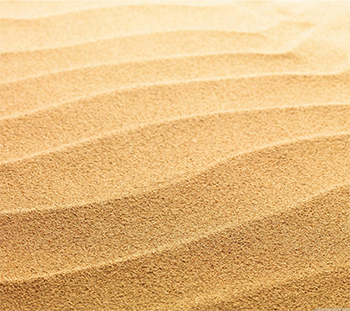 Sand is the oldest hydroponic media being first used by the Aztecs in the 12th century. Sand is readily available and inexpensive making it one of the most efficient and cost-effective methods of soilless culture. Sand is perhaps the best hydroponic media for drip and drain to waste systems. In drain-to-waste systems, the nutrient solution is not recycled greatly reduces the likelihood of diseases such as Fusarium and Verticillium spreading in the medium. It also means there is no nutrient imbalance since plants are fed with fresh nutrient solution at each irrigation cycle. Sand is commonly mixed with Vermiculite, Perlite, and or coco coir. All help retain moisture as well as help aerate the mix for the roots.

When using sand as a growing media you will want to use the largest grain size you can get. That will help increase aeration to the roots by increasing the size of the air pockets between the grains of sand. Mixing Vermiculite, Perlite, and or coco coir with the sand will also help aerate. You will also want to rinse the sand well before use to get as much of the dust particles out of it as you can. One big downside to using sand as a growing media for hydroponics is that it is very heavy.  3-4 gallons of wet sand can weigh up to 50lbs. So you won't want to be moving it once you get it set up. Or use it in a ratio of something like 20%-30% sand and the rest Vermiculite, Perlite, or another type of growing media to reduce weight.

Rockwool is one of the most common growing media's used in hydroponics and is the most widely used substrate for the commercial production of hydroponic tomatoes. It is made by melting rock and spinning it into extremely thin and long fibers, similar to fiberglass. They take these fibers and press them into cubes of varying sizes. Rockwool is a sterile, porous, non degradable medium. Rockwool comes with a high pH should be pH balanced before use. That's done by soaking it in pH balanced water before use. Rockwool has all of the benefits of most growing media, with some pretty serious downsides. The fibers and dust created in the spinning and compressing process can be harmful to eyes, nose and lungs. You can prevent the dust by immediately soaking rockwool in water once you take it out of the package.